“Dare we hope? We dare. Can we hope? We can. Should we hope? We must, because to do otherwise is to waste the most precious gifts, given so freely by God to all of us.”
-Andy Ripley “Ripley’s World”

This year marks the 20 year anniversary of South Africa’s victory at the 1995 Rugby World Cup. A moment that will long be remembered as our country celebrated it’s freedom and pride together as one for the first time.

In celebration of this momentous anniversary we would like you to share your story of where you where when we won the world cup.

The best story will win a R1000 Exclusive Books voucher! Entries must be emailed to socialmedia@exclusives.co.za before 15 May to qualify. 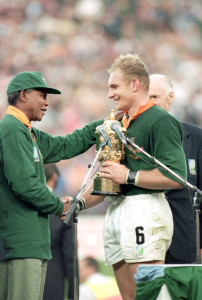 24 June 1995. The stage is set for the biggest sporting event ever in South Africa. It’s the Rugby World Cup final and we are in it ! With the eyes of the world set on this new rainbow nation still learning about what a true democracy really means. The whole country is united behind the team and there’s a country wide spirit of unity and excitement. I’m getting gooseflesh just thinking about it. From early in the day fans are showing their support and it’s just crazy ! We just came out of isolation and we’re playing against the mightiest rugby nation in the world – the All Blacks. Those who aren’t lucky enough to go to Ellis Park have bought their meat and beverages of choice. Want nou gaan ons braai manne ! Every pub and tavern is filled to the brim with the game on every television screen in South Africa. Everybody is geared up and ready to stand behind the Boks.

I’m working but we have a tv, biltong, chips and non-alcoholic drinks at the ready. For 2 hours no work is going to get done but even management understands and have no problem with it. We are a whole room full of people crowded around that one small tv cheering and going mad – we are as good as at the game. Thank goodness there was no such thing as load shedding yet ! The game is tight and ends on 12 – 12 after full time. Extra time is added and I begin to get nervous. I have a bus to catch and it’s the last bus of the day. I can’t miss it.

And so I miss the last couple of minutes…

I have to run for the bus stop and so I miss the most famous dropgoal in the history of World Cup rugby. I’m 5 minutes early at the bus stop and while I wait on Church Square in Pretoria for that bus the whole city suddenly exploded with car hooters and people shouting and cheering and I know we must have won !

The bus driver’s excuse?
He was watching the game until the end!