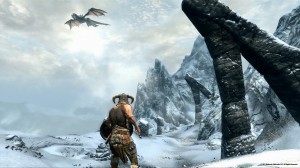 So you’ve played all the Elder Scrolls games, and you reckon you are a bit of a master by now (as most of us tend to do)…but are you good enough to beat the record time for Elder Scrolls V: Skyrim set by Bethesda‘s Sam Bernstein? He managed to clock the game in an amazing 2 hours, 16 minutes and 10 seconds (beating fellow Bethesda employee, Jeff Browne, by a mere 20 seconds)!

Obviously this is not the kind of record just anyone can set, as pointed out in an article by IGN:

Bethesda traditionally holds a speedrun competition to celebrate when a game ships. When Fallout 3 finally headed off to store shelves, Bernstein managed a time of 1 hours and 15 minutes, again pipping his opponent to the post by a matter of seconds. No cheats are allowed, and the participants must draw on every ounce of their insider knowledge of the game to zip through it in such a short space of time.

The Elder Scrolls V: Skyrim is one of the most anticipated game releases of the year, so make sure to pre-order your copy from www.Exclus1ves.co.za now!

If you want to read more about the development of Skyrim and about the antics of the zany team at Bethesda then check out Bethesda’s awesome blog.

The previous installment, Elder Scrolls IV: Oblivion, scored a whopping 94/100 on Metacritic, so Skyrim is sure to be an instant hit!