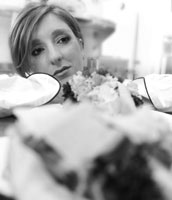 Anna Trapido trained as an anthropologist at King’s College Cambridge and completed her PhD in the Department of Community Health at the University of the Witwatersrand in Johannesburg. She qualified as a chef at the Prue Leith Chef’s Academy in Centurion. She combines her culinary and cultural interests in her work. She has worked in garde manger, pastry departments, confectionary and catering companies in South Africa, England, Switzerland and India. She is a food writer, broadcaster and the co-author of To the Banqueting House: African Cuisine – an epic journey which won the Gold Medal at the World Gourmand Cookbook Awards, Beijing in 2007. Trapido is the editor of Dine: Top 100 Restaurant Guide. She previously taught garde manger and culinary French and is now responsible for the Pan African cuisine programme at the Prue Leith Chef’s Academy.[1]