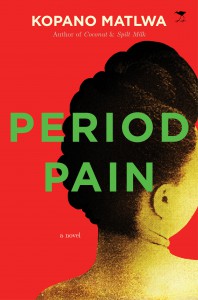 Period Pain is a raw, hard-hitting and an intensely personal account of a young woman’s struggle to find her place in contemporary South Africa.

Masechaba is a young woman who suffers from severe bleeding that cripples and controls every aspect of her life. Like many young women, she was not properly prepared to deal with this stage of her life and she feels a sense of shame around it. Raised in a deeply Christian home, she blames herself for it, and accepts that she has to live with it; she feels it is God punishing her for her sins.

Masechaba embarks on a medical career in the hope that she can convince her future colleagues to remove her womb to stop her unbearable bleeding. She is not prepared for the realities of working in an understaffed, under-resourced and overcrowded hospital, however. Like many young medical professionals, she soon becomes disillusioned with and desensitised to the extreme working conditions in equal measure.

When Masechaba meets Nyasha, a confident, outspoken Zimbabwean doctor, who is treated poorly by patients and colleagues because she is a ‘foreigner’, she realises she cannot stand back and watch and soon takes action. She embarks on a public campaign to change the xenophobic ways of her hospital which takes her down a dangerous path. Soon, she faces the wrath of those who are angered by her campaign.

Dr Kopano Matlwa is an award-winning author of three novels. A medical graduate and heath care activist, Matlwa won the 2007 EU Literary Award for her critically acclaimed first novel Coconut. She received the which won the Wole Soyinka Prize for Literature in 2010 for her second novel, Spilt Milk. She has recently returned to South Africa after completing an MSc in Global Health Science and is currently reading for a DPhil in Population Health at the University of Oxford. She is the founder, with Dr Chrystelle Wedi, of the the Ona Mtoto Wako Initiative, which takes life-saving antenatal health care to women living in remote or rural parts of the Congo.