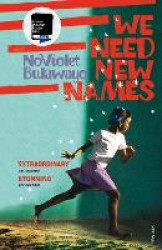 Leaving your country is like dying, and when you come back you are like a ghost returning to earth, roaming around with a missing gaze in your eyes

In We Need New Names we meet ten year old Darling who lives in a town in Zimbabwe made of tin shacks called Paradise. She spends her days stealing guavas with her friends: Bastard the aggressive ring leader, Chipo who is mysteriously pregnant at 11, Godknows whose shorts are so worn out his buttocks protrude, Sbho the beautiful one and Stina the level-headed one. They do their stealing in a neighbouring town, Budapest, where the white people and rich black people live.

The novel is set in post-independence Zimbabwe, where the political climate is rife with violence and chaos, and anyone who opposes the new government, led by Robert Mugabe, is dealt with violently. Darling and her friends often refer to a ‘before’, when they had proper houses and were not living in shacks – the days before the bulldozers came and destroyed their homes, before their schools were shut down because their teachers left to find better opportunities in other countries.

Soon, Darling herself becomes a migrant: she leaves her home and friends to live with her aunt in Detroit, Michigan, USA – or “Destroyed Michygen” as she refers to it. She joins the world of thousands of displaced immigrants who realise that the ‘American Dream’ they have held on to is not what it’s cut out to be. The grass is indeed not greener on the other side. Darling struggles to adjust to American life, especially the paralysing cold –

As for the coldness, I have never seen it like this. I mean, coldness that makes like it wants to kill you, like it’s telling you, with its snow, that you should go back to where you came from.

– and like many immigrants before her, she struggles to find her way in a new world, and is haunted by guilty thoughts of who and what she left behind in her home country.

We Need New Names is a fast paced read, especially in the first half of the novel, when Darling is younger. The story slows as Darling gets older, and you miss the style that shaped the descriptions of her earlier life. Bulawayo does, however, an excellent job of showcasing the contrasts between Darling’s life in Africa and her life in America. She shows us how despair and suffering are universal.