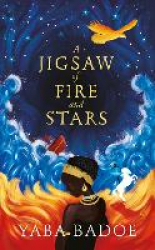 If book covers are anything to go by—they shouldn’t be, but they are—this one draws you in immediately. It is a beauty, and tells you straight away that A Jigsaw of Fire and Stars is positioned as a young adult debut in the vein of Nnedi Okorafor’s What Sunny Saw in the Flames (aka Akata Witch).

This book far exceeded all of my expectations. I started thinking it was going to be a fairly mundane young adult fantasy novel and by the end I was invested in every character’s storyline—especially that of our protagonist, Sante, who is phenomenal and amazing.

The fantasy elements in the book are somewhat confusing, in that there aren’t clear rules set out in the beginning of the novel for how the magic works, but this did not bother me too much, mainly because Badoe’s prose convinced me that it didn’t matter. How magic works isn’t what’s important, what’s important is the story she is telling and the fate of the characters she is weaving.

The plot is not so heavy that you get lost, but the sentences are short and it takes a bit of time to get used to the prose. Ultimately, your imagination takes you where it may, with the assistance of Badoe’s cast, especially Sante.

In addition to outright magic, magical realism is present throughout the story, much of it rooted in African folklore, as well as some more hard-hitting themes, such as human trafficking and refugees. It is also a very diverse book, with a varied mix of characters including a travelling circus troupe and two women who have a romance.

Sante was a baby when she washed ashore in a sea-chest laden with treasure. It seems she is the sole survivor of the tragic sinking of a ship carrying migrants and refugees—her people. Fourteen years on she’s a member of Mama Rose’s unique and dazzling circus. But, from their watery grave, the unquiet dead are calling Sante to avenge them:

A bamboo flute. A golden bangle. A ripening mango which must not fall…

Rich in the rhythms and colours of Africa and glittering circus days, and unflinching in its dark revelations about life, Yaba Badoe’s novel is beautiful and cruel and will linger long in the memory.

About the author: Yaba Badoe is a documentary filmmaker of dual Ghanaian-British nationality with many years experience making social issue and art documentaries for the main terrestrial channels in Britain.

A graduate of King’s College Cambridge, she worked as a civil servant in Ghana before becoming a General Trainee with the BBC. Among her TV credits are: Black and White, a BAFTA nominated four-part documentary series about race and racism in Britain and One To One, a documentary about the life and writing of Nobel Laureate, Toni Morrison, for BBC4.