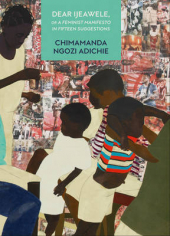 Chimamanda Ngozi Adichie was recently in the news for comments she made on transgender women and I myself joined the critics. I thought, How dare she? The episode made me realise that all our feminism is problematic. Now, I am not bashing feminism, but have learned that the premises underlying any ideology are not immune to criticism. If anyone should voice opinions on transgender women, it should be transgender women first. Let’s please pass the mic and hear from them: there is enough room for all of us.

I was, however, not upset enough to join the boycott on Adichie’s books; thus this review on her latest non-fiction offering.

Adichie was asked a few years ago by a dear friend from her childhood how to raise her baby girl as a feminist. Dear Ijeawele is Adichie’s response. Here you will find fifteen invaluable suggestions – compelling, direct, amusing and downright funny – on how to empower women from an early age.

The shame we attach to female sexuality is about control.

The book carries with it the moral urgency for having honest conversations about raising children, and opening up a fairer world for girls and women. It is a short work: it can be finished in less than an hour. I would recommend it to all women, and indeed anyone who still needs to do some unlearning of received ideas about women, including: the use of ‘tradition’ to justify cultural practices that adversely affect women, and how parents have fallen into this trap; the problematic premise of chivalry, which is female weakness; and the dangers of linking appearance and morality, instead of allowing how one dresses to amount to a question of personal taste, rather than, for instance, calling a short skirt ‘immoral’.

We teach girls to be nice and ‘likeable’, while their role is really simply to become their full selves, honest and aware of other people. The catastrophic consequences of culturally-enforced ‘likeability’ goes to the heart of the abuse that women have to put up with today.

If we don’t place the straitjacket of gender roles on young children, we give them space to reach their full potential.

The book also tackles the much debated topic of hair and how ‘white’ hair is portrayed in mainstream media. Hair texture that is valued is straight and swingy, it falls down rather than stands up. The value placed on straight, swingy, down-falling hair is something of a metaphor for the ground that feminism still has to cover, in making progress toward full emancipation for all women.

Adichie’s final suggestions is: Teach her never to universalize her own standards and experience. Her standards are for her alone and not for other people. This is a suggestion that Adichie herself might have taken more cognizance of, when speaking about transgender women.

Overall, however, this is a key book that is set to change the lives of countless girls and women for the better. It is often said motherhood does not come with a manual. I think what Adichie has pieced together here is step toward just such a work.