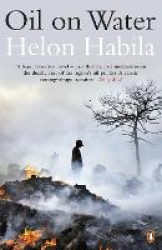 Helon Habila takes you on a chase through an underworld of investigative journalism in a war-locked country, and his pace is impeccable.

Two journalists are recruited to find the kidnapped wife of a British oil engineer.

There’s Zaq, an infamous hack whose journalistic skills came naturally to him – he never went to university to study. But his columns in the newspaper have made him well-known for his intense eye for detail and his pithily subjective views. And there’s Rufus, a keen cub eager to get himself noticed, who has no idea what he’s let himself in for when he joins the mission of traveling into the oil-rich regions of the Niger Delta, where militants rule and the currency dealt in is the lives of hostages. Rufus soon finds himself acting as intermediary between editor, husband, captive and soldier. As they follow the trail of the missing woman, the chase for ‘the story’ becomes about much more than just uncovering her whereabouts, and develops into a mission to make sense of the journalists’ own muddled lives.

The novel delivers a cinematic adventure and a remarkably tense race against the clock, set in a haunting world of mangroves, floating villages and jungle shrines. In a cruel twist of fate, Rufus finds himself taking on Zaq’s role much more literally than he ever anticipated, and as the body count rises, and the environment burns, he learns that truth can often be a bitter pill to swallow.

Using Rufus as the detective-like character in this mystery allows for an exploration of journalism as a vehicle for the voice of the people, and shows the frustrations of reeling in the truth when political and economic forces spin the tale their own way. Though Rufus starts out searching for ‘the white woman in the jungle’ he ends up finding something more transformative and profound, and the reader is right there with him, feeling the potent mixture of humanity and the sharp edge of nervous anticipation about the truth.

Helon Habila was born in Nigeria. He has lived in Lagos, Norwich, New York, Washington DC, Berlin, and currently teaches creative writing at George Mason University in Virginia, USA. His writing has won the Caine Prize, the Commonwealth Prize (Waiting for an Angel), the Emily Balch Prize, the Virginia Library Foundation Fiction Prize (Measuring Time), and has been shortlisted for many other prizes. In 2013 he edited the Granta Book of African Short Story. He is currently working on his fourth novel.