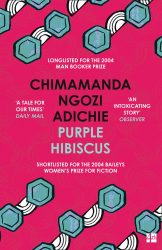 When a house is on fire, you run out before the roof collapses on your head.
– Aunty Ifeoma

Purple Hibiscus is a story told in the first person by Kambili Achike, a 15-year-old girl who is part of a relatively wealthy family in Enugu, Nigeria – along with her older brother, Jaja; her mother, Beatrice; and father, Eugene. Eugene sees himself as the epitome of Christian [Catholic] devotion, but beats his wife and children almost senseless when they exhibit what he deems to be wicked behaviour.

The mechanisms of how domestic violence and child abuse happen are made clear in the book. While such violence on the less powerful is unequivocally wrong, the violence that Eugene unleashes on his wife and children shows that people are neither only good nor bad – they are complex personalities who have their own logic for doing things, no matter how wrong.

The book touches on religious extremism, and strains with issues around ‘traditionalism’. While Kambili’s father, Eugene, is a devout Catholic, his own father follows traditional Nigerian religion, which worships a main divinity, Chukwu. Eugene has cut his own ‘heathen’ and ‘ancestral-worshiping’ father out of his life because of their religious differences – a painful image of how it can be difficult to maintain family ties in the case of different religious beliefs.

When Nigeria is shaken by a military coup, Kambili’s father is mysteriously involved in the political crisis, and a ray of light enters this grim picture in the form of Eugene’s widowed sister, who invites the children to spend time with her family in the university town of Nsukka. This visit to Aunty Ifeoma’s modest home in the university apartments begins a series of life-changing experiences with far-reaching consequences for everyone in the Achike family. In this house, noisy and full of laughter, she discovers life and love – and a terrible, bruising secret deep within her family.

Overall, Adichie delivers a multi-dimensional novel. It is both the tender first-person narrative of a teenage girl who finds her own voice – despite years of abuse and intimidation that have left her stuttering – and a story of love, the strange love in her nuclear family that generates no laughter, the nurturing love that holds her extended family together, and the personal turmoil and excitement of her first crush.

Kambili’s narrative voice is fresh and authentic, enriched with Igbo expressions and peppered with African yarns. Purple Hibiscus gets its name from a flower in the story that Jaja takes from Nsukka and replants in Enugu. It symbolises the delicate blooming of teenage Kambili, and Jaja’s bravery to speak his mind.