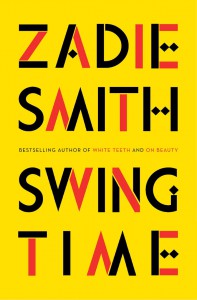 I have recently discovered Zadie Smith and I have to say — Why didn’t anyone put me on to her sooner? This has not been an easy read, however: Swing Time does a difficult dance. It doesn’t quite mesh together to create the masterpiece it could have been.

There is a worldwide phenomenon in literature at the moment: writers writing fiction that is explicitly about race, ethnicity, identity and politics. Considering the state of the world — and the USA in particular, with #BlackLivesMatter and the #WomensMarch as direct-action responses to troubling developments — you won’t find it difficult to guess where all this literary inspiration is drawn from.

In Swing Time you have two brown girls who dream of being dancers and, for me, should be allowed to be children, but instead are consumed and burdened with worldwide politics. At such a tender young age. It made me walk away heavy for them, and myself.

Smith’s ambitious, exuberant novel moves with them from northwest London to West Africa (to The Gambia, in fact, so recently in the news).

Tracey plays the largest role in the novel as the narrator’s childhood best friend and eventual foil, ever-present in her life despite the distance, through space and class, that the narrator travels. Tracey appears as a woman with a static personality, one that barely changes throughout the pages, regardless of where her life leads. Although both the narrator and Tracey are biracial and band together in their dance class, Tracey is nearly the narrator’s opposite. While the narrator comes from a more-or-less two-parent household, Tracey lives alone with her mother, with occasional visits from an abusive father; while the narrator’s mother is a black academic, Tracey’s mother is a white alleged alcoholic; while the narrator is unfit as a dancer, Tracey shines. The narrator seems to drift along, never really content or at one with herself. Throughout the book she is an honour student, a slacker, a pro-black scholar and a lover.

The only facet of her personality that remains constant is her affinity for singing, which is often undermined by Tracey’s superior dancing. For a large majority of the novel, the narrator exists almost exclusively in association with Tracey, yet Tracey dominates every scene she appears in. I get the distinct feeling that this effect was deliberate, but it leaves the narrator almost totally undefined, making it harder for us to understand her.

Smith’s Aimee, meanwhile, is a paragon of white celebrity culture occupying black and brown spaces, first in music and dance, and then the very lives of villagers in The Gambia, where she is opening a school for girls with the narrator’s help. Aimee’s presence in Swing Time serves as a cautionary tale on the power of whiteness: it comes, it takes, it leaves; no one can stop it. This is evident in all Smith’s characters’ fates, as whiteness and its attendant power exercises its economic and cultural prerogatives in their lives.

Dazzlingly energetic and deeply human, Swing Time is a story about friendship and music and stubborn roots, about how we are shaped by these things and how we can alternatively survive them, and use them to survive.

Praise for Zadie Smith: ‘Smith is the most naturally gifted young novelist around – with a fastidious ear for dialogue and a lethally quiet comic touch. Above all, she can move us’ — Times Literary Supplement.