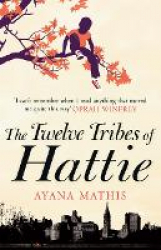 I can’t remember when I read anything that moved me quite this way, besides the work of Toni Morrison. – Oprah Winfrey

This book was a gift from a friend, who told me how he adores it and said it reminds him so much of his childhood and home in the Eastern Cape. A whodunit novel, it is not a light read – it stretches you, following a thread of events through decades. There are several lessons outlined in this book, and I think each character learns something about themselves in each chapter. It is, ultimately, a beautiful story of family and life lessons learned.

Hattie flees Georgia, USA, during the Great Migration with her mother and two sisters. It is 1923 and Hattie is only fifteen. When she first walks out onto the streets of Philadelphia, she sees the difference freedom makes and vows to never return to the South again.

However, she ends up marrying August, with whom life is nothing but poverty, disappointment and children – eleven of them, and one grandchild, making twelve. The Twelve Tribes of Hattie chronicles her life through the stories of these children, up to 1980. Each chapter tells the story of one or more of the children but also tells readers more about Hattie, her hopes and the deferment thereof.

Hattie’s is a tale of strength, of resilience and heartbreak that spans six decades. Her American dream is shattered time and again: a husband who lies and cheats and children raised in a cramped little house that was only ever supposed to be temporary. Following a disaster that claims her twins, she keeps her remaining children alive with sheer will – and not an ounce of the affection they crave.

She knows they don’t think her a kind woman, but how could they understand that all the kindness she had was used up in feeding, clothing and maintaining them. How do you prepare your children for a world you know is cruel? The lives of this unforgettable family form a searing portrait of twentieth-century America, from the revivalist tents of Alabama to Vietnam, from a black middle-class enclave in the heart of the city, to a filthy bar in the ghetto. The Twelve Tribes of Hattie is an extraordinary, distinctive novel about the guilt, sacrifice, responsibility and heartbreak that are in attendance alongside Hattie’s ferocious love.