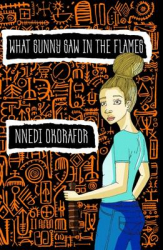 What Sunny Saw in the Flames will take the reader on an imagination roller coaster ride, into a world where nothing seems to be quite the same – and has not yet been witnessed in any magical fantasy book that this reviewer is aware of. A coming of age novel ideal for young adults.

Sunny is a feisty, bold and curious thirteen-year-old girl born in New York, but living in Aba, Nigeria. She is albino. She feels lost, and is the object of much name-calling: ‘Yellow!’, ‘White Akata!’, and so on. She’s even spat on, and is bullied at school, despite (or because of) being particularly clever.

Her skin and eyes are so sensitive to the sun that she has to carry around an umbrella to protect herself, and has to play soccer in the afternoon. She’s good at soccer, even though her brothers tease her about it. Not only can she play soccer well, she also can see into the future, and soon brings a group together – Sunny, Orlu, Chichi and Sasha – to explore an exciting realm of strange creatures and dark secrets.

Okorafor is a brilliant storyteller, and I enjoyed this book in one sitting. Think of it as a kind of Nigerian Harry Potter – a first for African fantasy. Okorafor keeps pushing the boundaries and we can only expect a terrific sequel to What Sunny Saw in the Flames later this year.

from What Sunny Saw in the Flames

The world is bigger and more important than you.

At times, your worst defect is actually your greatest asset and this Sunny struggles with as she grows and learns her new found powers. But there’s a catch and will Sunny learn?

Someone is kidnapping children and maiming or killing them. The group is asked to help track down the criminal. Will Sunny be able to overcome the killer with powers stronger than her own, or will the future she saw in the flames become reality?