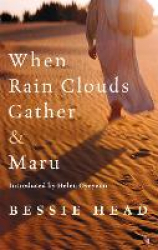 Bessie Head is one of southern Africa’s hidden gems. Like most people I was introduced to her because her books were part of my school’s syllabus – and since then I have long read and re-read everything and anything by her, at times to jog my memory of what was.

She is a late South African author (1937 – 1986), and When Rain Clouds Gather was her first novel, which was published in 1968. As the novel opens, Makhaya is on the run for violent actions taken to undermine the racist, colonial system of 1960s South Africa. His escape and subsequent journey in search of self-determination matches, to some extent, Head’s own coerced migration from apartheid South Africa to the isolated country of Botswana.

In the heart of rural Botswana, the poverty-stricken village of Golema Mmidi is a haven to exiles from far and wide. A South African political refugee and an Englishman join forces to revolutionise the village’s traditional farming methods, but their task is fraught with danger as the pressures of tradition, opposition from the local chief and the unrelenting climate threaten to divide and devastate the fragile community.

Fast track, Makhaya is taken under the wings of both a kind, old farmer named Dinorego and Dinorego’s adopted British son, Gilbert, who is an enthusiastic and much-learned agricultural specialist. Dinorego sees Makhaya as a potential husband for his daughter. Gilbert sees the village of Golema Mmidi as an opportunity to implement the latest farming techniques in order to create prosperity in his adopted home. He sees Makhaya as a potential partner in realising his vision – and a fellow stranger to the land, but one with a better chance of communicating to the village and integrating Gilbert’s radical ideas into its culture. However, local politics, the interference of dictators, and opportunists continually hinder their progress.

Critics of When Rain Clouds Gather have often taken exception to the advocacy of Western agricultural intervention in Africa, casting the novel as a somewhat straightforward tale of three diverse, resourceful outsiders triumphing over a semi-backwards local society.

To my mind, the best way to tease out the novel’s greater complexity is to pay particular attention to the place of women in it. Not only do the idealistic actions of the men rely on and perhaps exploit the inferior social status of women in rural Botswana – a status that would have directly impacted Head, and that neatly summarises the overarching colonial hierarchies in play – but the women characters can also be seen as embodying a critique of the leading men. This critique may remain unspoken in so many words, but it’s the women who undergird the novel’s true social realism, not the men.