So, a paleoanthropologist, a mining engineer, a marketing executive and a housewife walk into a birding hide… when good birding goes bad.

Twitch, the world premiere of a new South African comedy by Robert Fridjhon, about two harassed couples in a bird hide over a birding weekend comes to Pieter Toerien’s Montecasino Theatre from 12 June!

Starring Michael Richard, Louise Saint-Claire, Bronwyn Gottwald and Russel Savadier, the play will be directed by Steven Stead and Charmaine Weir-Smith and designed by Greg King, with lighting design by Tina le Roux.

Four twitchers in a bird-hide, somewhere in the Kruger National Park, are taking part in a major birding competition. The first prize is a trip to Mala-Mala, the second prize a new pair of binoculars. Furthermore, the team is fighting for their club’s reputation as well as the prestigious Owl Award. The pleasantries and social formalities slowly begin to unravel with outrageous consequences when uncomfortable truths are revealed about the birding club, its members and, more specifically, the characters in the birding hide.

Refinement and courtesy degenerate into irrelevant and often childlike bickering as the foursome argue evolution versus creation, man versus nature and the merits of a low-carb diet!

Twitch writer, multi award-winning Robert Fridjhon has been on the stage for over 20 years; from Shakespeare to musical theatre, comedy to drama. Recently he starred in Travels with my Aunt, Boeing Boeing, A Perfect Wedding, Funny Business, The Mousetrap (which toured to Hong Kong at the end of 2012).

Fridjhon worked full-time for FreeMe Wildlife Rehabilitation Centre in 2006. The majority of the cases he worked on involved birds. As a passionate conservationist, he is pledging a percentage of his royalty fee to FreeMe. He was recently involved in a lion rescue and rehabilitation programme at the Krugersdorp Rhino & Lion Park, where he raised three of his own lions. 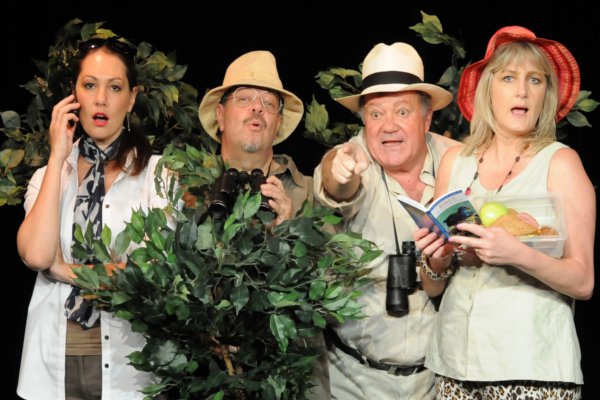