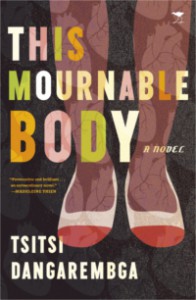 This Mournable Body is the last of a trilogy that began with Nervous Conditions and was followed by The Book of Not. The reader should be privy to the contents of the first two books, especially Nervous Conditions, for easier comprehension and context, as Dangarembga reflects back to the previous books.

The title of the book was inspired by an essay penned by Teju Cole titled Unmournable Bodies. In the essay Cole laments the fact that, in the advent of national tragedy, some bodies are deemed more equal than others. Even in death, they are discriminated against, are not worthy of mention, empathy, and grief. This resonated with Dangarembga because the scenario was playing itself out in her home country of Zimbabwe, despite the latest Chimurenga. It was business as usual, no global outcry.

The cover of the book boasts a pair of shoes, pumps, Lady Di’s – as in Diana, Princess of Wales. The shoes feature prominently in the text. For me they’re a symbol of British influence in the lives of the main character Tambudzai Sigauke, her cousin Nyasha, and Zimbabweans at large.

This Mournable Body follows the career, economic woes, life and survival of adult protagonist Tambudzai. The story opens, with Tambudzai unemployed, unmarried, childless and homeless. She had just resigned from her job in advertising due to corporate politics. She then secures a teaching post, which triggers amental breakdown. Finally she reconnects with a former student and colleague who offers her an opportunity in ecotourism. Despite being well educated, optimistic and hungry for success, post-democratic Zimbabwe proves to be a nightmare for her as a black woman. She is forced to grapple with issues of capitalism, racism, misogyny, patriarchy, status, alcohol abuse, and feminism. Circumstances force her to lie, connive, become aloof and self-centered. She is of the opinion that, “You don’t lose your appetite over another person’s problems”. Reality and the simple facts of being an adult bring her full circle to her village and a people she had shunned for more than 3 decades. The book depicts how the state of a people is oft-times directly linked to the state and status of its country.

The normalized nature of the physical and mental abuse of women is highlighted: how men generally felt (and feel) entitled to police and to harm women. For instance, Gertrude, a fellow hostel resident, is humiliated, insulted, and assaulted in broad daylight by men at the bus terminus, for, according to them, being under- and inappropriately dressed. There is also a graphic scene of the sexual violation of a female tenant, Mako by a fellow male tenant. We note how a domestic worker is beaten, accused of infidelity by her philandering gardener husband to the point of miscarriage of their baby. The physical abuse permeated race and class, and people generally were complicit and looked the other way.

The text is in second person. In this fashion Dangarembga manages to maintain a distance from the protagonist, to detach somewhat, from the emotionally overwhelming themes – themes that also affect her as a career woman and a Zimbabwean. Her book is a generous and multi-layered offering and it’s clear that her and screenwriting skills helped enhance the flow and movement of the story.

I was captivated by how, through the relationship of school mates Tambudzai and Tracey Stevenson, the impact of privilege, racism and capitalism was brought to the fore. Tambudzai, despite having attended the same school as Tracey, having worked with her, being the more creative, always found herself second at the finish line.

Dangarembga writes of what she has lived, experienced and observed. She shares her passion for and confidence in her subject matter. The narration is close to the heart, it can be believed that there are shared character straits amongst Nyasha, Tambu and Dangarembga.

I was also intrigued by how Dangarembga brought to life inanimate objects like shoes, a car named Gloria, and a sack of mealie meal. She thrives on the symbolism of ants and hyenas which are utilized effectively throughout.

It was the greatest of pleasure to reconnect with Babamukuru, Chido, Netsai, Nyasha and Maiguru, characters we initially encountered in Nervous Conditions.

Sequels are often tricky in terms of keeping to a high standard set by the first book, as shown by Dangarembga’s The Book of Not. Here, great justice is done to the award-winning and classic Nervous Conditions. This Mournable Body brings us not just full circle in the series, but also in the life of our childhood protagonist Tambudzai.