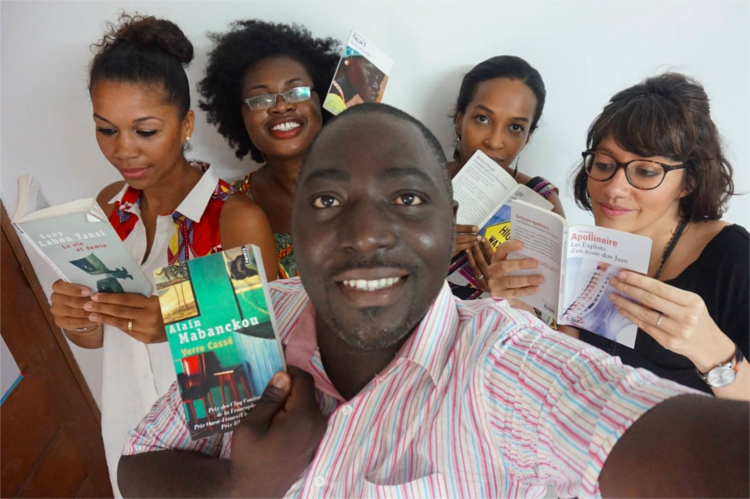 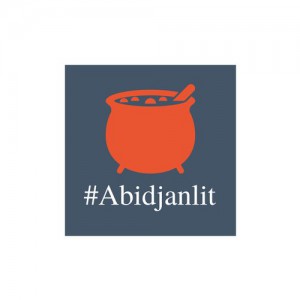 Q: Tell us about #AbidjanLit – what’s it all about?

Abidjan Lit is a movement of passionate readers based in Côte d’Ivoire but from diverse horizons. As we love to say, identities are complex and diverse. By saying Abidjan Lit, we are playing on words. Our Anglophone counterparts will say the T part and imagining that we mean Abidjan Lit(erature) and they won’t be wrong in thinking that way.

There was a time in the not-too distant past when for an artist to make it in Africa and have access to the international market, s/he had to pass through Abidjan. Côte d’Ivoire was the place!!!! By saying Abidjan Lit(erature), we are saying that we intend for Abidjan to be the capital of literature from this continent. Writers from this continent won’t feel that they have to make it in Paris or London first before coming here, but Abidjan, and Africa as a whole will be the first platform.

Our francophone audience will say Abidjan Lit (Lee) – Lit here for reads, so Abidjan reads. You know, sometimes we hear in the media, “Oh, Africans don’t read” or “Ivorians don’t read”. Who made that survey that came up with such an overwhelmingly negative conclusion? We read.

We are putting all that into a pot and making a stew, hence the logo!!!

Q: What’s the reading culture like in CIV: what and who are people reading?

There is a reading culture in that people want to read. There are a lot of reading/literature events that take place in the capital but there is a big problem, as with most African capitals, with accessibility to books. The libraries are not so well-equipped and at time, there are non-existent.

There is however an Ivorian saying that is this: Découragement n’est pas Ivoirien (Discouragement is not for the Ivorian).

There is the reader, who will purchase a Kindle or send book shopping list with friends travelling abroad.

So, is there a reading culture in Cote d’Ivoire? Yes, but the local book industry needs an overhaul.

Q: Renee Edwidge Dro, as translator, do you think it’ll be important to translate books from other countries on the continent in order to grow a stronger market for writers and publishers?

Absolutely! On a political level, 100% yes. This Pan Africanism we talk about cannot happen if we do not have an idea what is going on in our different countries. CNN cannot do this job for us but literature can. And when I say literature, I mean fiction. Oh yes! You know, I think about this book, The Beautyful Ones Are Not Yet Born. Despite what our “pan Africanists” might say about Nkrumah, for me, that book says that all wasn’t beautiful under Nkrumah’s regime. I only recently read it in English. So when I first read that book, it was in French. That means that it was translated, that’s why I could have access to it.

Even on a commercial level, it will make sense. How many are we on this continent? There needs to be an effort, a concerted effort to think about how we access that strong market, how we make all that literature accessible.

And we can even translate books from beyond Africa also. We are wanting markets, aren’t we? So we need to get close to those who’ve been in this game a long time. We need to approach pioneers like Margaret Busby, Bibi Bakary-Yusuf and pick their brains. We need to pick the brains of translators of renown like Wangui wa Goro; we need to approach editors like Ellah Wakatama Allfrey to run editing courses. I’m by the way scared of all these women but every time I have approached them, they have talked nicely to me and have provided me with good help, advice. So let’s be bold, because we need infrastructure.

It is all very well discoursing at our literary festivals or being the young this and that, but we won’t get a slice of this stronger market if we don’t build infrastructures.

Q: Run us through a typical #AbidjanLit session – what happens, where do you congregate and what has the response been like?

A month before, we post a save the date on our Facebook and Twitter pages. No theme is mentioned, not a place. Because we forgot to mention above, we don’t hold our literary conversations in one place, we move around town and hold it in different places. A co-working place among all the tech people, an arts and crafts shop so while people are buying their handbag, we are launching into a rendition of a poem by Sappho. We have held sessions in an art gallery, in a newsroom; anywhere. Abidjan Lit is about imposing literature everywhere.

So after the save the date, we will divulge the theme. We’ve done Bad Genres to say that ok, we have the literary novel, but what about the proper Mills & Boon stuff, is that not literature too? Are the poems of Sappho not literature? Are the Ankara Press books not literature? What about crime writing?

Our latest discussion was called “Enchanted Childhoods” where we picked books written in the voice of a child or a teenager. So for instance, Tomorrow I will be 20 by Alain Mabanckou.

We meet in a place which we would have also mentioned on our different pages. Every session varies. So at the last session we had, we opened at 6:30pm (we are prompt! None of this African time lark) with a poem by L.G. Damas (Negritude author) called Hoquet, or Hiccup in English. In this poem, the writer speaks about the disaster of his “Creole” education pretending to instil in him French values. This poem was read by a singer-songwriter.

Then we welcome our guests in the different languages on our beautiful continent. Then we all introduce each other and we start the session. On each theme we discuss, we read an extract from a text and the discussions follow from that.

If you’ve ever been to a Bible meeting, people discuss from what the Bible says, right? Well, so in our discussion, we might say, well in this extract, the narrator in Mabanckou’s Tomorrow I will be 20 says …… don’t you think that he might be looking at his childhood through rose-tinted glasses?

So people will give their comments, that yes sometimes we look at our childhood through rose-tinted glasses and they might recount something that happened to them. Some people might decide to use an example from another book, say Allah is not obliged by Kourouma, and then we will lead on that example by talking about another aspect of childhood.

At Abidjan Lit, we have “hardcore” literature people and we have lovers of literature. We are just saying that literature addresses everything.