2011 saw the release of several new Sherlock Holmes titles, all sanctioned by the Sir Arthur Conan Doyle Estate, and culminating in the superb Sherlock Holmes: A Game of Shadows.  I have discussed nearly all of these releases here, and continuing in that vein, let’s look at the newest Sherlock Holmes contribution.

On New Year’s Day, BBC released the first episode of the second season of Sherlock. Picking up from the cliffhanger ending of season one (which is very much Steven Moffat‘s style), we continue with three of the most important stories in the Holmes canon: Scandal in Belgravia (based on the short story “A Scandal in Bohemia”), The Hound of Baskerville and The Reichenbach falls. Each episode is a fresh approach to the original adventures, with new endings and interpretations. Baskerville is a military research compound and Irene Adler is no longer an opera singer, but now a dominatrix styled simply as The Woman. As someone who knows the stories, it is wonderful to see that something new can be done with them more than a hundred years since their publication. My gripe with the Granada series is that it reproduces the stories almost verbatim, which is deeply boring to someone who has read them already. Sherlock instead imagines a new life for the fabled detective by putting him in a modern London with all the technology he could want and some very capable villians. 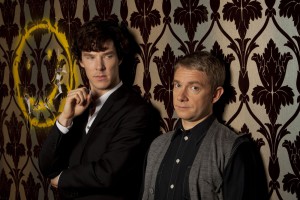 It is hard to discuss the episodes without spoilers, so let’s look at what else makes them great. The production values are incredibly high; no expense has been spared on 221B Baker Street, or the fantastic text scrolls that should look cheap but don’t. The cast is stellar, none more so than Martin Freeman as John Watson. Sure, Sherlock is the star but Watson is our connection to him. He shares our amazement and disapproval. He gives Sherlock an audience as well as a moral compass and Freeman truly embodies the strength of the soldier with the compassion of a doctor.

There are three episodes of ninety minutes each, each one sublime in its characterisation, writing and pacing. The director’s commentary alone is worth getting the DVDs for. Get the first serieshere if you haven’t seen it yet, and pre-order the second season now.