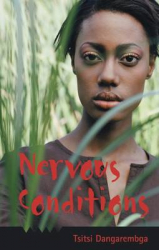 She walks in to the room full of Black women from all walks of life, young and old, all gathered at the UNISA Conference Centre in Ormonde to listen to the soft-spoken author of Nervous Conditions – filmmaker, playwright, poet and activist Tsitsi Dangarembga, who was hosted in the country by the Thabo Mbeki African Leadership Institute in celebration of International Women’s Day.

Dangarembga articulates herself with certain poise: the demeanour of someone who has earned her strides, and thus walks with the ease and pace of gratitude.

Her lecture is on a very topical issue: African Women Activism; Is Feminism Divisive, unAfrican and anti-Black? Debunking the Myth.

From the title alone you can grasp what a mouthful of a lecture it was, unpacking African feminism and how it interlocks with African activism, unlike the feminism of western ideals.

African women have always had to combat sexism, and this has often meant interposing their lives, their bodies, between physical harm – even death – and freedom. I vividly recall the Rhodes University female students in April 2016 who protested bare-chested because they needed to name and shame the sexual violence at the institution.

Not to take you further out but recently, City Press ran a headline which spiralled into online debate by naming a very popular South African musician who turned a woman’s body into a crime scene by violating her. He was convicted for the sexual crime, but the responses to the City Press story were appalling and show how rape apologists get away with so much.

But contemporary acts of resistance like the Rhodes students’ have unveiled new strategies and resuscitated women’s collective action, putting emphasis on the fact that feminism without activism is a recipe for failure. As Dangarembga put it, if we do not come out of the shadow of our fears, ‘which make us shrink back into ourselves, because we are often too intimidated to step out of ourselves’, our feminism will be in vain.

Here are SIX highlights from the lecturer:

1. Black spaces. There is nothing more beautiful than being in a room full of people who tell the same stories as you and share the same struggles – to be with those who don’t need an explanation of why we, Black young feminist women in modern-day South Africa, are so angry and tired. Something powerful happens when Black women come together to share their stories. The room was smeared in unrefined shea butter and black castor oil.

2. Africans in dialogue. The lecturer took it back to the time when Africans told stories around the fire – call it a social imbizo – and this is what the discussions brought when Professor Pumla Dineo Gqola and Simamkele Dlakavu joined to the podium, to unpack the many troubles of women’s activism, both in academia and society as a whole. This also allowed questions from the audience who critiqued and praised the topical issues raised.

3. Wokeness: Women’s activism vs feminism. [‘Woke’ is increasingly used as a byword for social awareness.] Read the table directly below to unpack your standpoint.

4. Ideologies. Too many times has another woman said something and you have frowned upon her, because the hegemony of your ideology separates you from her. If we are to truly impact society, we must engage intersectionally in public spaces.

5. Commitment. If you are to embark successfully on any role, commitment is the key. Dangarembga has dedicated a fair share of her career to addressing issues that directly affect women. ‘Consciousness, like nature, abhors a vacuum,’ she says. Be conscious of your commitments.

6. The uncertain era of Fallism. The #Fallist movement has highlighted the level of distrust which continues to exist amongst men and women, heterosexuals and homosexuals, able-bodied and disabled. It has, perhaps unintentionally, shed light on post-apartheid South Africa’s failure to protect women, specifically Black women, from the multiple oppressions of racism, sexism, misogyny, patriarchy, classism and homophobia. Even within the most powerful Black radical movement of the day, Black feminists are portrayed as objects of ridicule in the struggle for further decolonisation. In this respect, Fallism could benefit from further introspection.