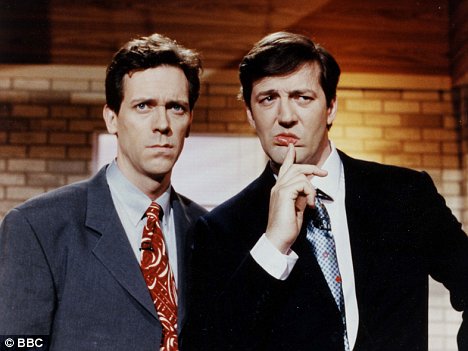 It would be a difficult task to describe Stephen Fry and his life accomplishments in a few lines but we shall try. Contrary to prior knowledge, Stephen Fry’s fame is really attributed to a lot of dabbling. He is best known for his work as a writer, actor and author. He attended Queen’s College in Cambridge in 1979 after being locked up in prison for three months for credit card fraud. He started his career in English comedy-television and starred in shows like A Bit of Fry & Laurie, Blackadder and Jeeves and Wooster. He has starred in many BBC adaptations of plays and books, factual programs, QI and movies like A Fish Called Wanda, Gosford Park and more recently, Sherlock Holmes: A Game of Shadows. Fry was a well-known voice on BBC Radio 4 in the 80s; he wrote many plays and even starred in a documentary about his bipolar disorder called The Secret Life of the Manic Depressive. He was the voice of all of the Harry Potter audio books and a voice in many a video game and advertisement. He has written four novels, a number of non-fiction works and two autobiographies. He did all of the above, and more.

This week, Fry’s Planet Word was released in South Africa. It is a five part series on DVD, written and presented by Stephen Fry dealing with language and its complexity. In  Fry’s Planet Word , Fry attempts to uncover the origins of human language and why humans are the only species that speak in the ways they do. Furthermore, Fry argues why language plays an integral function in the way we identify ourselves with the world around us. Fry looks at how language is abused and the communicative uses of swearing.  Lastly, Fry looks at the written word and the use of language in storytelling.