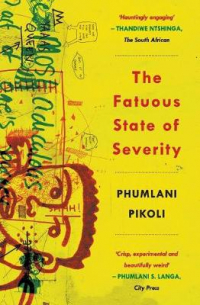 Phumlani Pikoli is one of the ascending young literary voices. The Fatuous State of Severity, a series of short stories and illustrations, marks his debut in the literature landscape. The author made a brave attempt at self-publishing the book; it garnered him a modest following and was later published by Pan Macmillan SA.

After suffering from depression which led him to be admitted in a psychiatric clinic, Pikoli found solace in words. As a result his debut collection carries a palpable melancholy mood while maintaining a humorous, hopeful and inspiring narrative.

The author wisely captures the life of young urban South Africans by touching on race, classism, politics, social media, mental illness, sexuality and relationships. With 21 stories, he is able to present bold and imaginative tales that may have strong relevance to anyone who knows urban life, young or old.

The book opens with an infectious story, ‘My Beautiful Boy’, which explores the subliminal and imminent racism that exists in this country. Using a heart melting bond between an older and younger brother, the true nature of beauty is explored. Lines like: “I love you for the person you are, not for what the world will try turn you into,” offers a reminder that even in the often emotionally aloof Black culture, love does exist.

‘Not For You’ unpacks the phenomenon of new money which is mostly linked to so called tenderpreneurs and BEE entrepreneurs. In just a few words, Pikoli unveils the judgement and anxiety that comes with the new culture of wealthy Black men in a world that still sees them as nothing but servants. ‘Tumblr’, ‘Deactivate’ and ‘I Know Where I Am Going’ paint a terrifying picture of the agitation we suffer through the world of social media.

“The Fatuous State of Severity – a mouthful for most – was a state of mind I had learned to occupy while recuperating from a depressive episode at a psychiatric clinic. It was a great liberation that helped me launch myself onto the authorship radar.” – Phumlani Pikoli

But, without a doubt the story that best captures the beauty and darkness that the author possesses as a writer is ‘To Shy Away in Silence’. The story gives a spine-tingling personification of mental illness – with the stigma that the disease still has; and especially amongst men, the story is an anatomy of how the disease manifests itself for those who still doubt its existence. The young author dips you in fully and as you crawl through the words you are reminded of the healing effect that storytelling can have. The only negative thing is that you wish the story was a novel.

This collection can be read not just to kill time, but rather offers poignant experiences that will force you into a self-reflective zone. It’s dark, raw.