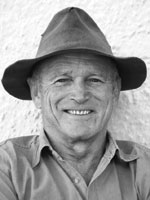 Antony Osler began practising and studying Tibetan Buddhism under Lama Chime Rinpoche in England in the early 1970’s. After a time in the Insight Meditation tradition with, among others, Joseph Goldstein, he ordained as a Zen monk under Joshu Sasaki Roshi in the USA and later also studied under Korean Zen Masters Dae Soen Sa Nim and Su Bong.

He was the first meditation teacher at the Buddhist Retreat Centre in Ixopo and also lectured part-time in Buddhism at Rhodes University. Osler now lives with his family on Poplar Grove, a small farm near Colesberg in the arid Karoo where he sits on the stoep, meditates in an old shearing shed and runs occasional retreats. In his professional life Osler is an advocate who specialises in human rights work and labour arbitrations while his wife, Margie, runs the farm and trains rural school teachers.[1]