Like My Sister Lives on the Mantlepiece, this title surprised me with the depths of its wisdom considering its guise as a book for pre-teens. I’m thinking of categorising these ‘Sneaky Adult Favourites’. 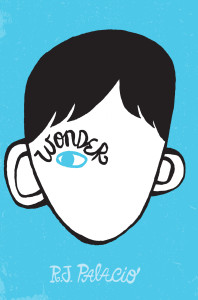 August Pullman, or Auggie as he is called by his loved ones, was born with a facial deformity that causes kids to ask him if he was in a fire, or if he’s a zombie. A Star Wars fanatic, Auggie also spent two years wearing an astronaut helmet in an attempt to hide his face. At the suggestion of his parents, he decides to leave homeschooling and go to fifth grade. Supported by his remarkable family, the first half of the story is narrated through Auggie’s eyes. Worse than the intentional cruelty of some of the kids (like naming him the Plague and refusing to touch him) is the fake friendliness of some of the teachers and the students, with their ‘shiny’ smiles. The rudeness, Auggie knows and can try to ignore; it’s the false smiles and quick looks away that hurt as much. There’s no anger, just frustration that might be expected of any small boy when so few will be his friend. The reader is also treated to multiple narrators in their own sections, creating a wonderfully multi-faceted story.

The major theme of the novel is ‘be kinder than is necessary’, something that definitely should have pride of place in not just a children’s novel, but in any novel. I struggled to get into it initially, since I was expecting some emotional manipulation with ‘he is deformed, take pity, for shame!’ After all, the book arrived at the office with a packet of tissues attached. But it isn’t manipulative or woeful; just sweetly honest. There are all the castmembers of childhood; kind teachers, bullies, nerds, popular groups, jocks, mean girls. Auggie navigates them all, and gets a little help from his friends.

So often books focus on cruelty and pain, and I would never be so trite to say that life does not deal vast amounts of unfairness on a daily basis to people who don’t deserve it. But it is something of a joy to read a book that celebrates the potential for kindness in everyone. I cried, I laughed, and I loved the characters in their development. I especially loved the line “I think that there should be a rule that everyone should get a standing ovation at least once” from Auggie. This is definitely going to be a hit with the parents that borrow this from their kids once lights are out.

Wonder will be available in paperback in April.

One Response to Book Review of Wonder by RJ Palacio

Leave a Reply to Henriël Click here to cancel reply.