Jane Austen, despite being dead since 1817, continues to outsell many living authors. Six books and a handful of letters cemented her in the consciousness of the Western literary world, with Mr Darcy becoming the template upon which many a moody suitor has been based. Austen’s biting social satire was veiled in wit and setting, and continues to be as relevant now as it was two hundred years ago. 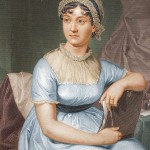 Could they be perpetrated without being known, in a country like this, where social and literary intercourse is on such a footing, where every man is surrounded by a neighbourhood of voluntary spies, and where roads and newspapers lay everything open?

But no one can pass up the chance to make a few bucks off the work of someone else, hence Death Comes to Pemberley by PD James. Unfortunately, it seems that she didn’t do the best work she could have, considering this review by the inimitable John Crace for his Digested Read:

It is a truth not universally acknowledged that a classic novel is not in want of a sequel. And so it was that on the morning of 14 October 1803, some six years after the joyous occasion of their wedding, that Mrs Elizabeth Darcy sat down with her husband to discuss the arrangements for the forthcoming Pemberley Ball.

“First, my love,” said Mr Darcy, who had become increasingly uxorious over time, “it behoves us to run through the back story for those who are not up to speed with the original. How glad I am that I overcame my Pride and Prejudice to make you my bride and how happy I am we have two healthy sons, both like me, called Fitzwilliam!”

Elizabeth, who seemed to have lost the sardonic edge that had made her one of the most memorable heroines in literature since becoming mistress to one of the largest estates in Derbyshire, smiled sweetly. “Indeed,” she replied, “perhaps we both had too much Pride and Prejudice, and needed to acquire some Sense and Sensibility. If only my headstrong sister Lydia had not eloped with Mr Wickham, all would be well.”

Ouch. But perhaps deserved. After all, the Mona Lisa would probably not be improved by adding a few more colours to it. Or a moustache. But maybe if we add zombies, we get something better.

A better adaptation of Pride and Prejudice is the monster mash-up produced by Quirk Classics, Pride and Prejudice and Zombies. Their first foray into mixing the classical with the macabre is still my favourite of their collection. According to this article in the LA Times, apparently I’m only one of 750,000 fans.

Of course purists were upset at the thought that martial arts and zombies would be added to the text, afraid that the fundamental tenets of class satire and equal true love would somehow be eroded by an invasion of the undead. And while I can understand their worry, I feel that the book is better for the additions. The Bennet sisters are trained in the Chinese martial arts, defenders of their neighbourhood and known for being as ‘fetching as they are deadly’. Mr Darcy is trained in the Japanese arts and this is part of the friction between himself and Liz Bennet. But at heart the story is untouched, only improved with interludes of women kicking an extraordinary amount of undead ass and a Hero–style showdown between Liz and Mr Darcy’s aunt. As a martial artist, I squealed with delight at the addition of one my favourite activities with one of the best books ever written.

Ultimately, the relationships in the story continue on as they always did, and Seth Graeme-Smith writes in such a way that his contributions are only noticeable because they drip bile and brains everywhere. I think it is a great deal better than most will give it credit for, and I would recommend it to anyone who wanted to get into the Jane Austen anthology but was too afraid of Victorians to do so.

Of course, perhaps the most famous adaptation is the BBC mini-series of Pride and Prejudice, also fondly known as ‘the movie with Colin Firth in a wet shirt’. Introduced to my class in standard eight, it instantly turned us into swooning fans of Mr Darcy and rabid devotees of Austen. Perhaps the BBC considered it their ‘Enlighten Teenagers Project’. Maybe they should remaster it and release it again so that we may be spared these interminable and asinine Team Edward and Team Jacob wars.