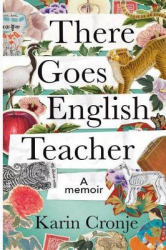 Karin Cronje makes the decision to go to South Korea to teach English, in what seems like an almost unconsidered manner. We meet her at the beginning of this wonderful memoir, in her son’s bathroom with her friend Victoria, crouching together in an attempt to find out where Korea is.

She has a good reason to go, as do many women of a certain age with children whose education needs to be paid for, or just because jobs are becoming tenuous.

Cronje’s decision to go to Korea to teach English at a school is based on her need to pay for her son Marko to finish his architectural degree. It’s a decision that has been made to make money and has come about not through a training college for teachers of foreign languages, but through a connection of friends.

And so she sets off, having left her precious belongings with a friend, hoping her father will still be alive when she returns, and that her ageing dog will be okay.

Oh, and she also wants to secure Victoria’s pension.

The story that unfolds as a confused and somewhat technologically challenged Cronje arrives in Korea is riveting from start to finish. The sheer confusion of arriving in a country where you don’t speak the language or understand the customs in, and of itself, make this a fascinating read.

But, it is the author’s courage in reflecting not only the things that happen to her, but sharing her own psychological challenges that really lift this memoir to another level.

She slowly becomes accustomed to teaching at a school, where children come to improve their English after regular school, even though she is driven to the occasional drink by the sheer pressure that is put on Korean children. If you can imagine what giving an English class to students close to midnight is then you will have some of the picture painted by Cronje.

There are obviously happy moments, she meets Dae-ho, who teaches meditation and forms a strong bond with Cronje. She also has to learn how to say goodbye when she returns to South Africa.

And returning is not easy. Cronje is brutally honest about the struggles she faces when she finds that her son has made some dodgy friends, there is an hilarious sub-story about her trying to buy a car from one of them, funny to read but no doubt not funny at the time.

This is a book about being brave and tenacious, but told with Cronje’s wit and sometimes brutal sarcasm. It’s also about reintegration and falling apart.

A brilliant book filled with information and storytelling at its best. I literally could not put it down until I had finished it. Cronje is one of the most intelligent women I have the privilege to know, but I have to say while most memoirs scare me, this one delighted me.