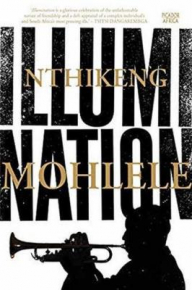 The best thing about this book is that the author pays homage to both contemporary and old school musicians, particularly in the jazz genre in a manner that immortalises their contribution to the art fraternity. One cannot help but appreciate the implied parallels drawn by the author between the protagonist’s struggles and those of the late novelist mentioned in the book, Dambudzo Marechera. The author’s poetic description of the visual appearance and the sounds of the City of Johannesburg is inspiring. Furthermore, the manner in which certain sensitive political issues have been tackled in the story is subtly thought-provoking.

Illumination is a long-winded account of the life story of a forgotten, lonely artist, Bantubonke. The protagonist has become a recluse who spends most of his days avoiding the world and soothing himself with music in what he calls “The Listening Room”. His first love is music. Other entities can only be second to it.

Despite his pedantic and judgemental ways, Bantubonke has a circle of friends that he made during his college days. The author explores the different ways in which he has been affected by the highs and lows of his relationships with different individuals in his circle of friends. He loses some of them through a series of events beyond his control. Although he is stimulated and inspired by the company of his remaining friends, when he can get it, he cannot help being critical towards aspects of their personalities or nuances that he finds irritating. He seems to be caught between his inherent need for their companionship and his intolerance of their imperfections. Will he find a way to preserve these connections?

Bantubonke’s wife is a research scientist who has been working in France for some time. It is interesting that Bantubonke does not talk much about her, at first, as he chooses to express his feelings about his musical talent, dreams and achievements, the city of Johannesburg and his friends. The first time he mentions his marriage, it seems to be an afterthought. The couple seems to have drifted apart over the years, but the fraying threads of their relationship seem to be held together by daily text messages and phone calls. At first, this relationship does not seem to be a priority to him, but later, he becomes fixated with the prospect of reviving it.

Bantubonke also tries to rekindle his musical career. His determination is offset by problems such as the mediocrity of his current band and the drastic evolution that has transformed the industry since his heydays. The producer tries to temper down his expectations but Bantubonke believes that he still has enough distinction and grit to release a successful jazz album.

Nthikeng Mohlele’s love story to art and its artists is beautifully told but however it is diminished by his distracting tone of grandiloquence. This was probably done to emphasize the pomposity of the protagonist; however, it could have been toned down a notch to keep the attention of the reader. Furthermore, the life of a celebrated performer is a rich opportunity for some dramatic storytelling as it is the sort of life that very few people can get a front row seat to observe. The story lacked the kind of occasional sensationalism that surrounds artists, the excitement that most people look for when they read about existing or fictional artists. I wanted to sympathise with Bantuonke, to relate to his struggles, to admire his brilliance but he was so self-absorbed that I lost interest in the character quite early. Though not my favourite character there is a lesson I learnt from him, and that is to be more appreciative of the human element of the artist behind the music. To be an artist like Bantubonke came with a personal life of sacrifice and that amount of sacrifice in pursuit of a dream is certainly worth applauding.

One Response to Nombulelo Moyo Reviews Illumination by Nthikeng Mohlele