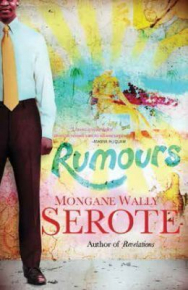 Mongane Wally Serote’s Rumours explores a man’s journey to dig deep into himself in an effort to discover what it is that he already knows, but had somehow forgotten along the way. Serote uses South Africa’s post-apartheid context as the backdrop for the unpacking of the residues of the apartheid system, including the spiritual and social baggage that is carried by those who were deeply involved in South Africa’s liberation struggle and how they now have to contend with life in the new South Africa.

It could be argued that the book has autobiographical elements because the life of Keke, the central character of the book and that of Serote are similar. In the same way that Serote was an uMkhonto weSizwe (MK) veteran during the struggle; so was Keke and the plot orbits around Keke’s need to reconcile his painful past with his angst-ridden present. It can therefore be deduced that Serote is able to write with understanding and thoughtfulness about the disillusionment that is a result of intentions not necessarily translating into actions – precisely because this disappointment was a reality that he was individually faced with when South Africa’s liberation struggle ended.

At face value, Keke seems like a man who has his fundamentals in a row: he has a wife and two children, a house, and a good job that affords him a good car. However, as the story unfolds, it becomes evident that Keke is nursing a long seated meaninglessness that flows beneath the façade of his self-actualized life like a secret river. It then takes a near death experience and the intervention of the people in his life for him to embark on a journey that will force him to question everything in an effort to find the source of his suffering, and to make peace with the people in his immediate life, as well as his ancestors.

On quite a few occasions in the book Keke finds himself thinking about the gains of the struggle, and pondering whether the lives that were lost and the sacrifices that were made were necessary, seeing that today, economic freedom remains elusive and the ideal of democracy is turning out to be an anti-climactic certainty for the majority of South Africa’s population.

Rumours makes one reflect on the course of South Africa’s democracy and its consequences. As the book unfolds, it becomes evident that Keke’s unhappiness stems from the fact that he has not maintained links with his ancestors, and as such, he has no spiritual anchor. This sad state of affairs is also compounded by the fact that as parents, Keke and his wife Mmabatho have not taught their children their mother tongue, and as such, the children will be out of tune with their culture and their heritage. The book stresses the importance of maintaining cultural values by exploring the possible consequences that can be borne from societies being culturally apathetic.

This struggle between the maintenance of cultural values in an increasingly modernizing society is an issue that a lot of South African families have to balance and the excerpt below indicates some of the questions that Serote asks in his exploration of the issue:

How could he [Keke] sort out the language question for Thebe and for Thalitha? There had been four ministers of education in the eighteen years since the inception of democracy; what had they been doing all this time? Couldn’t they have introduced African languages at schools by now? Corruption, poverty, alienation from their Africaness and the diversity of South Africa were now the biggest threats to non-racism, non-sexism, democracy and prosperity in South Africa. He was started to realise that the newly democratic South Africa had produced a youth that were alienated, disgruntled and completely unaware of the meaning of South Africa. [page 130]

Ultimately, Rumours is a moving exploration of Keke’s oscillation between past and present. It is through him that readers are able to grapple with the way the past irrevocably influences the present while slowly charting a way into the future.