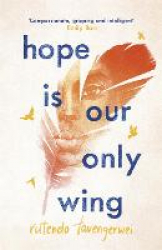 A brilliant debut full of Zimbabwe’s golden sunsets. Shamiso is a fifteen year old girl forced by the death of her political journalist father to move back to Zimbabwe from London, this is just after the political transition of Rhodesia to Zimbabwe. The loss on its own is enough to break any little girl’s world, but she must remain strong because her father’s death is under enormous suspicion – what really happened to her father, the night of that strange and implausible car crash?

But time is friend to no man. The cuddling eventually stops and time’s blow unleashes its rage.

For Shamiso, struggling with grief and bewilderment following her father’s death, hope is nothing but a leap into darkness. Add in an unlikely friendship with Tanyaradzwa, whose life has been turned upside down by a cancer diagnosis – hope is the only reason to keep fighting for both of them.

Shamiso begins to confront her terrible fear of loss. In getting close to another person, particularly someone who’s ill, isn’t she just opening herself up to more pain? And underpinning it all. A teen debut novel takes an honest look at hope, and the grit and courage it can take to hang on to it.

This is a story about friendship and confronting everyday fears but still holding on, teenage me would have marvelled at this book.

About the Author
Rutendo Nomsa Tavengerwei lived and studied in Zimbabwe until the age of eighteen, when she moved to South Africa to study law at the University of the Witwatersrand. She has just completed a Masters at the World Trade Institute, and is now working at the World Trade Organization in Geneva, Switzerland.
Rutendo has always loved to write and received tutorials from her father from the age of nine. HOPE IS OUR ONLY WING is her debut novel.