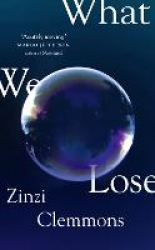 I waited with bated breath for this book. The USA cover art drew me in and the tweets raving about how good it is only served to heighten my curiosity. Critics were quick to call it the ‘debut novel of the year’.

Zinzi Clemmons was raised in Philadelphia by a black South African mother and a white American father, and the author’s background makes up the basis of What We Lose, which is deeply rooted in main character Thandi’s struggles about where she belongs. In her suburban town in America, she doesn’t feel as American as some of her friends, ensconced in a predominantly white neighbourhood; nor does she feel at home with her ‘Coloured’ cousins back in South Africa.

Both raw and artful, minimal yet amusing, What We Lose is an intimate portrait of love and loss, and a fierce meditation on race, sex, identity, and staying alive after you have lost a loved one. That said, its treatment of South Africa is problematic, and it’s occasionally difficult to pick the thread of the plot up from under the story’s thickly-laid identity politics.

Here are my chief concerns with the author and the book:

1. Her view of South Africa

Stats SA recently released a poverty trends report showing that one in two South Africans live under the poverty line, amounting to almost 30 million people. Three out of five blacks are poor and poor whites are essentially non-existent. Though the South African government promotes the fantasy of economic emancipation to the standards of the developed world for all, we are still a developing country with all the attendant problems – including fancy malls pocketed within a landscape of desperation. Herein lies the problem: the expectations of Americans who do not understand the underlying issues of this country, in contrast with the complex problems on the ground here. The complexities and contradictions simply do not translate into Clemmons’ fiction, making What We Lose just another American book that doesn’t scratch the surface.

2. Her portrayal of Colourism (the terms people of colour use to describe different shades of black, which can often be derogatory)

“My mother cautioned that I would never have true relationships with darker-skinned women. These women would be jealous of me.” – Thandi, What We Lose

Thandi is a black woman, but she is often mistaken for Hispanic or Asian, and thus the novel is ingrained with Colourism and its associated prejudices. Thandi only addresses this extremely problematic issue in superficial ways, and I personally do not feel any remorse for her: by the end of the novel, she remains unwilling to unlearn her privilege as a person of color (POC), and how this privilege affords her a better life than those of her POC peers.

POC does not necessarily mean pro-black. This is not to say this novel isn’t pro-black, but simply that it remains far-removed from the real issues that black people – on both sides of the Atlantic – face every day.