Penguin Books South Africa and Little Brown in the UK graciously allowed us to publish the following article written by Paula McLain about fact vs fiction in her book, The Paris Wife, which explores the relationship between Ernest Hemmingway and Hadley Richardson. 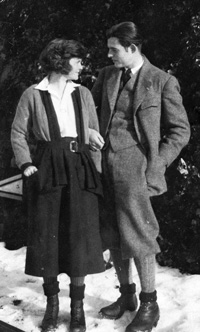 In Ernest Hemingway’s introduction to his memoir, ‘A Moveable Feast’, he writes, “If the reader prefers, this book may be regarded as fiction. But there is always the chance that such a book of fiction may throw some light on what has been written as fact.” I’m hoping my novel will work to illuminate not just the facts of Ernest and Hadley’s years in Paris, but the essence of that time and of their profound connection by weaving both the fully imagined and undeniably real.
When I began to research my book, beginning with biographies of Hemingway and Hadley, and with their delicious correspondence, I knew the actual story of the Hemingway’s marriage was near perfect; it was a ready-made novel, ripe for the picking. I didn’t have to invent a plot for them, nor did I want to. My work would be to use the framework of historical documentation to push into these characters’ hearts and minds, discovering their motivations, their deepest wishes.
The most important step for me was getting Hadley’s voice. She has very little dialogue in A Moveable Feast, but what’s there is so evocative. It led me to seek out the letters she wrote to Ernest during their courtship, and that’s when I knew I could write the book. Her speech rhythms, her intelligence and charm and sense of humor all come through with clarity and effervescence. I simply fell in love with her, with them both.
Beginning to truly hear a character’s voice is like finding a piece of magic string. It pulls you inside their consciousness, and helps you see the world through their very particular point of view, unfolding the story only they can tell. That’s ultimately why I chose to write a few select passages from Ernest’s perspective. There were things I simply needed to know about the choices he was making, and could only know those things from the inside out. He’s terribly complex. Parts of their story aren’t easy to understand—and yet I needed to understand them if I was going to fully inhabit the world that needed inventing: the interior one. In many of Hemingway’s biographies, Hadley is quickly dispatched as “the first wife,” a youthful experiment gone awry. Their emotional crisis—that terrible spring and summer when Hadley learns she’s been betrayed—occupies only a few taut pages in one well-regarded biography, but is the crux of my story. I invented what I couldn’t know—all of their dialogue, for instance—but knew, in a deeper way, one that can’t be aided by all the biographies in the world, what lay at the heart of what I was imagining.
Paris in the 20’s was such a singular time in history, and the Hemingways’ years there were so full of spectacular adventure and compelling encounters, that I felt entirely grateful to live it with them. Working on this book was hands down the most fun I’ve ever had as a writer. I’ll never forget it.

About the Author:
Paula McLain received an MFA in poetry from the University of Michigan and has been a resident of Yaddo and the MacDowell Colony. She is the author of two collections of poetry, as well as a memoir, Like Family, and a first novel, A Ticket to Ride. She lives in Cleveland with her family.

About the Book:
Chicago, 1920: Hadley Richardson is a quiet twenty-eight-year-old who has all but given up on love and happiness, until she meets Ernest Hemingway. After a whirlwind courtship and wedding, the pair set sail for Paris, where they soon fall in with a circle of lively and volatile expatriates, including F. Scott and Zelda Fitzgerald and Ezra Pound. Ernest and Hadley are thrust into a life of artistic ambition, hard liquor and spur-of-the-moment dashes to Pamplona, the Riviera and the Swiss Alps. But Jazz Age Paris does not lend itself to family life and fidelity. As Hadley struggles with jealousy and self-doubt, Ernest’s ferocious literary endeavours begin to bear fruit, and the couple faces the ultimate crisis of their marriage – a deception that will lead to the unravelling of everything they made for themselves in Paris, their ‘great good place’.