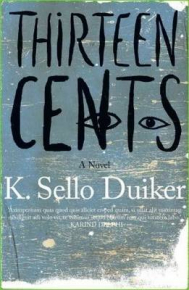 In the novel Thirteen Cents Duiker paints a vivid and heart wrenching picture of how, in post-apartheid South Africa, overt and covert marginalization still prevail. Racism, tribalism, exploitation, classism, corruption, crime, violence, violation, starvation, and displacement, are still a reality to a Black child. Even more toxic, complex and dangerous as it is camouflaged, nuanced, pretentious and insidious.

Ten-year-old protagonist Azure, unceremoniously leaves Johannesburg for Cape Town after the funeral of his parents who were brutally murdered. In Cape Town, however, he does not find the solace he had anticipated. Adults are unscrupulous, evil. Friends leave. Police are corrupt. Banks are sharks. He is kidnapped. Drug dealers are king. Sexual violation is rife. Closeted white men sleep with underage homeless boys. Female workers are harassed and exploited.

Azure grapples with issues of identity and belonging. His unique blue eyes on his black skin are a result of his many woes. The brutality and trauma he experiences, leads him to physically and mentally escape up Table Mountain. Where through the super natural, he seeks to avenge himself. While elevated on the mountain, he evokes and reaffirms the spirit of Saartjie Baartman, the Khoi people and their existence. Towards the end it appears as if justice will prevail.

Aaartjie Baartman appears to Azure in this fashion.

“At the cave I meet a woman who looks like she lived a very long time ago. She is short, and her bum is big, but she has the lightest smile I’ve ever seen. She wears only a leather thong and her long breasts are like fruit, like fat pears. She is shy and hides in the cave. I follow her in, careful as I walk. She sits in the corner of the cave while a small fire burns. I go inside and sit next to her. I can’t stop looking at her face. She has a beautiful face and a yellow skin that seems to glow” page 184

The story is deliberately and skillfully related in the first person with a raw innocence of a child protagonist. The text is further enhanced and authenticated using local slang that blends Afrikaans, English, Sesotho and isiXhosa. The effective use of short sentences and plenty of dialogue made the read fast paced and easily consumable.

Thirteen Cents is a shock to the system, dark, deep, and emotionally intense. It left me in a constant state of anxiety. Happy or light moments were far and in between. The violent and sexually explicit content was glaring. Not for the faint hearted. It took me out of my comfort zone as it tackled issues normally branded taboo.

Duiker merges reality and the supernatural. In his conversation with Sealy after Gerard’s demise, Sealy and Vincent are depicted as angels, Gerard as an evil spirit who was present in Soweto when Azure’s parents died, and their house set alight. On Table Mountain Azure transforms into a powerful magical being with paranormal powers.

An unhappy open ending. The book ends but the dire condition of a Black child and the illusion of post democratic South Africa prevails.

The author K. Sello Duiker was born in Soweto. He also lived in East London, Cape Town, and briefly in France and the UK. He suffered from mental illness, bipolar. In 2005 he committed suicide by hanging, this after having stopped taking his medication which he claimed stifled his artistic creativity. His great grandparents changed their surname from Lesufi to Duiker to pass off as “Coloured” for economic reasons because of apartheid. He was also gay. His other two books are Quiet Violence Of Dreams (2011) and The Hidden Star (2006).
Duiker drew generously from his lived experiences in his writing. Particularly on issues of mental illness, queerness and identity. Having been one of the only two black pupils at Redhill School added more to his anguishes regarding identity and inequality.