QHUBEKA CYCLE FORCE – MOBILIZING COMMUNITIES ONE BICYCLE AT A TIME

The Qhubeka CYCLE FORCE yellow and black beaded bracelet was launched at the 94.7 Cycle Challenge in South Africa, in November 2012, and sells for R30 to support Qhubeka’s fundraising. 12 million children walk to school each day, sometimes a four hour return trip. Qhubeka provides bikes in rural areas and townships, where communities grow trees or collect litter in return for bicycles. Qhubeka uses the funds raised by CYCLE FORCE to purchase and distribute bicycles, providing effective transportation to schools, clinics and shops.

The Qhubeka initiative seeks to empower communities by donating bicycles in exchange for planting seedlings or collecting recyclable waste – actions which also improve the communities in which they live. This embodies Qhubeka’s commitment to breaking the cycle of poverty while investing in the youth of South Africa.

Studies have shown five ways in which a bicycle makes a difference:

1. Improved School Attendance
Results of a study indicated an average 18% improvement in school attendance for girls and 16% for boys after bicycle distribution, and this lasted for two years. This is an encouraging sign of the program’s long-lasting benefits for students’ access to education.
96% of surveyed caretakers reported increased school attendance due to the bicycle, and that distance was the primary reason for absence. 89% of students get to school in an hour or less after bicycles were distributed, and Qhubeka believes that reduced travel times contribute to the increased attendance rates.

2. Improved Academic Performance
Academic performance data collected from schools in this study indicate an average 22% point improvement for both girls and boys after bicycle distribution, higher than the average, and improved pass rates were sustained for two years after receiving bikes.

3. Quality Of Life Indicators
Surveyed students rated their own feelings of well-being – 73% indicated they felt their lives were significantly improved after receiving bicycles, and 17% reported a noticeable change.

4. Less Fear
All surveyed rural students indicated they were afraid while walking to school – most feared attack by wild animals; and girls feared rape because their long walk starts in the dark. After bicycles were distributed, 69% of the students reported feeling safe most of the time while they traveled to school.

5. Better Access To Healthcare
Many survey respondents indicated using the bicycle to visit the local clinic. Appointments for children under 5 more than doubled, and this was attributed to the fact that mothers were able to transport young children for treatment with ease.

“My vision is to mobilise kids on bikes, a world where transportation is not a barrier to healthcare, education or economic development.”

Bracelets can be purchased online www.cycleforce.co.za , or at an Exclusive Books store. Buy and wear your Qhubeka CYCLE FORCE bracelet to support this exciting initiative. Visit Qhubeka’s site for details on the programme and donations www.qhubeka.org 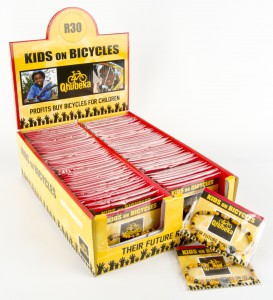