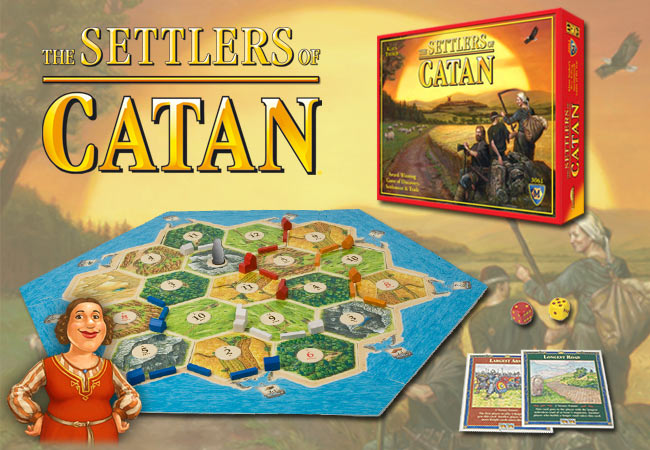 Settlers of Catan is a multiplayer board game created in Germany, and has sold over fifteen million copies in more than twenty-five languages since its release in 1995. German-style board games usually have simple rules that involve direct and indirect player interaction that will keep all players occupied until the end of the game.

Each player in Settlers of Catan represents a colony on an island. Settlers and Monopoly share a certain mutual goal: building houses from resources. But beware; the game quickly changes as soon as a colony owns more than 2 houses. Winning is achieved by gathering game points – also referred to as Victory Points. One acquires Victory Points during the game by accomplishing certain tasks, like expanding villages into developments, building roads, gathering resources and trading resources for development cards.

The Settlers of Catan board is made up of a colourful amalgamation of hexagons that fit into each other like the pieces of a puzzle. At the start of the game, hexagons are laid out at random, enabling each game to be different from the last. Every hexagon depicts and represents a different environment, like forest, farm, valley, ocean, mountain and desert. Developments are constructed along the edges of each hexagonal environment. An environment also determines the type of resource a player can acquire or trade. But, like the thief that hides in the desert, there are several twists in the game that will prevent one from executing a certain strategy. Each settler must rely on a combination of cards, roads, developments and the roll of the die to try and dominate one island.

Be wary when playing Settlers of Catan with any close friends, relatives or spouses. It’s an addictive game that will turn solemnly competitive with haste. You won’t like it when a player moves the robber onto your territory to steal your resources and prevent you from earning, not until another player rolls a seven anyway (Seven is supposed to be a lucky number). You’ll be especially unhappy when you’ve worked very hard on building the longest road and someone else steals ‘The Longest Road’ victory card from you. When you’re close to winning, the game will become particularly difficult for you – all the allies that you thought you had will suddenly become peculiarly distant.  It’s fun and challenging at the same time.