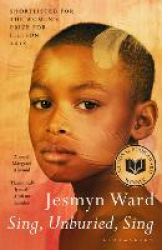 Sing, Unburied, Sing is the fourth novel by bestselling and multi-award-winning author, Jesmyn Ward. It is a poignant tale that explores the dynamics of an African American family trying to survive while navigating racism, drugs, abuse and death. The story is told through the eyes of a young, mixed-race boy, Jojo, who finds love and comfort in his grandparents, while his parents find their own solace in drugs – their way of dealing with the prejudice and complexities that come with being an interracial couple.

Leonie – Jojo and his young sibling Kyla’s mother – is lost in her love for her man, who gets arrested, and the sorrow that comes with the forced separation puts a strain on her. This results in her becoming an aloof single mother of two kids, one who resorts to abusing her children as a way to release her anger and pain. As her mother (Jojo’s grandmother), who is the guardian to the children, is slowly being chipped away by cancer, her father (the children’s grandfather) becomes a beacon of hope for the family.

Ward immaculately captures the different family storylines with her masterful, poetic prose, combining reality and fantasy. From the very first line, she reels you into a world where life and death become one, as young Jojo proclaims:

I think I know what death is. I like to think that it’s something I could look at straight.

Ward builds beautifully-colourful imagery into the environment the characters inhabit, and fleshes out their vulnerabilities while exploring the wider social context. All the while, she holds you captive as a reader, telling you the imperative story of what it means to be Black in a world that still considers you little more than a slave.

Sing, Unburied, Sing is a critically-important book, published at exactly the right moment in America, given that country’s current socio-political climate, in which the Black Lives Matter movement is fighting for space for black people to breathe. It’s a page-turner that lays you on its lap, blows your story back to you and carries you home safely, with a new perspective on life and identity.