Win a copy of The Casual Vacancy by JK Rowling 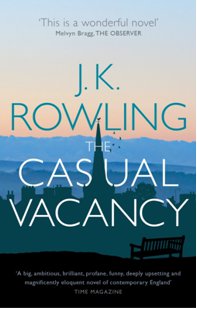 We’re giving away 3 copies of her book  The Casual Vacancy.

When Barry Fairbrother dies in his early forties, the town of Pagford is left in shock.

Pagford is, seemingly, an English idyll, with a cobbled market square and an ancient abbey, but what lies about the pretty facade is a town at war.

And the empty seat left by Barry on the parish council soon becomes the catalyst for the biggest war the town has yet seen. Who will triumph in an election fraught with passion, duplicity and unexpected revelations?

To enter, simply name any one of JK Rowling’s books in the comment thread below and you might stand a chance to win a copy of The Casual Vacancy. Terms and Conditions apply. Competition closes 1 pm on 31st August 2013.