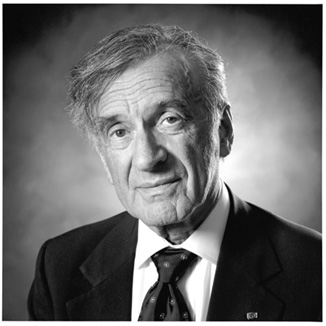 Elie Wiesel died on July 2nd. More than any other single person he drew the attention of the American public to the Holocaust. He acted out its lessons all his life: he won a Nobel Peace Prize in 1986; he wrote copiously, particularly about the Holocaust; he campaigned for the establishment of the Holocaust Memorial in Washington; he was a social activist and was a spokesman for many causes, including being an anti-Apartheid campaigner. He is one of the few Americans to have received a Honorary Knighthood and in 1985 he received the Congressional Gold Medal.

He wrote 57 books in all and was the subject of many other books dealing with his reflections and experience both during the Holocaust and about racial prejudice and intolerance in general. He was 11 when the Second World War broke out and 15 when he was sent to Auschwitz by the Hungarian authorities. His mother and one of his sisters died in Auschwitz and he and his father were then sent to Buchenwald where his father died weeks before the camp was liberated in 1945. For the decade after the War ended Wiesel refused to speak or write about his Holocaust experiences. He was encouraged to do so by other writers. His ability to bear testimony so eloquently was one of the reasons that US jewry was able to mobilise efforts to erect the Holocaust Memorial. Probably the greatest testimony to his life, will be the thousands of young people that he taught during a glittering academic career in the United States.